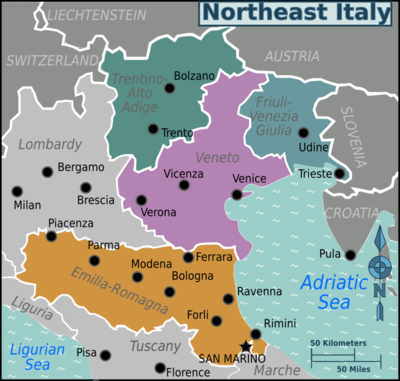 Northeast Italy is where I live. It is famous for the successful economic model that it implemented during the last decades of the 20th century. This model was characterized by a myriad of small, very flexible companies that adapted quickly to the market. In combination with the competitive devaluation policy carried out by Italy before the adoption of the Euro, this agility allowed these companies to gain relevant shares of the international market. This model—aka “small is beautiful”—was so successful that even foreign economists spent months here examining it in order to learn its secrets and to understand if it were exportable to their own countries.

Whilst this model increased the average income of the population generally, it affected its schooling negatively. I remember well the 1990’s of the last century. Many of my fellow students, once they finished their obligatory education, decided to go to work, and were attracted and tempted by the possibility of earning good money easily. They were right, in the sense that the economic growth rate was remarkable compared to today, and the companies were eager to find workers even if they were not necessarily skilled. Even though they took unskilled jobs, these new workers received a good salary. They paid a price for their choice, however. After the year 2000, the market’s accelerated globalization and the adoption of the single currency rapidly made the “small is beautiful” model less competitive and pushed entrepreneurs to innovate heavily to increase the value of their offerings. As a consequence, today the companies have started to select and to hire more qualified workers. The lack of a solid education and the inability to acquire new skills and competencies have caused troubles to these unqualified workers, who are now struggling to adapt to the changed conditions. In addition, the financial crisis triggered by the collapse of Lehman Brothers contributed to the bursting of the real-estate bubble. All of this has placed Northeast Italy in a severe economic situation from which we are still recovering.

This long premise is necessary to depict the social context of Northeast Italy, which, in spite of what I just described, is surprisingly one of the most lively and culturally active areas of the country. Compared to the population at large, Northeast Italy has produced a relatively high number of bands, literary festivals, and other cultural events during the past decades. This is quite interesting and, in my opinion, it can be interpreted as a reaction to the unplanned mass industrialization that we experienced in the second half of the last century and that left little room for anything that was not related to the business space.

I find particularly significant the relatively common cases of those people who held so-called humble jobs for decades, and who suddenly became artists such as writers or actors.[1]  Their artistic works reflected an imbalance and disorientation built on the assumption that it was possible to build a thriving society entirely by hard work alone. Thanks to their real-life experiences, they are able to describe accurately the contradictions of this society and to depict the discomfort, which many northeastern Italians started to feel as soon as they realized that a good job in a company is just not enough. Their tales are so genuinely true as they experienced all this drastically and life-changingly.

Another fitting example of this evolutionary process is the birth of new and original cultural events like the one I mentioned in this previous post. Here, I would like to talk about the literary festival pordenonelegge.it that takes place once a few kilometers away from my home in the town of Pordenone once a year. Although it is far from the glamour of international cities such as Rome and Milan, Pordenone has been able to hold this festival so successfully to make it one of the most famous in Italy. This is no small part thanks to the presence of world-famous authors such as Luis Sepulveda, Umberto Eco, and David Grossman. Its formula is simple but effective: over five days, a myriad of public talks take place in several different places spread over the city. Historical palaces, schools, and formally religious buildings like the Convent of St. Francis shown in the following images are typical venues.

In these talks, these authors usually converse with one moderator about their latest books and then have a brief Q&A session with the audience. At the end of each session, they are available to sign copies of their books that can be purchased during the festival. The occasion is a commercial event, too; no doubt about it. As a matter of fact, this festival was also founded to improve Pordenone’s economy. It is no coincidence that it was conceived in the year 2000 when the deindustrialization process of Northeast Italy had already begun and the town of Pordenone needed to find new ways to develop alternative economies, such as the tourism. The idea was then to leverage these cultural events to achieve this goal. From the beginning, the organization committee has striven to involve the entire city in the event. Large areas of the bars, the shops, and the public buildings turn to yellow—the official color of the event—to celebrate the festival.

Books of any kind are presented—novels, essays, poetry collections, etc.—embracing all fields of human knowledge. These few magic days offer visitors an outstanding concentration of intellectual stimuli. You can think about it as a sort of “cultural bombing”, which is very useful for the health of the readers’ brains. 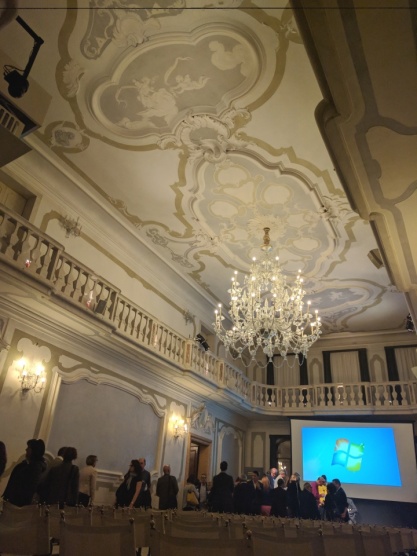 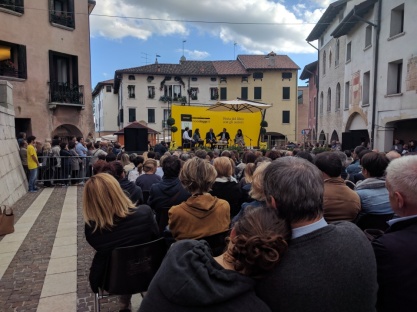 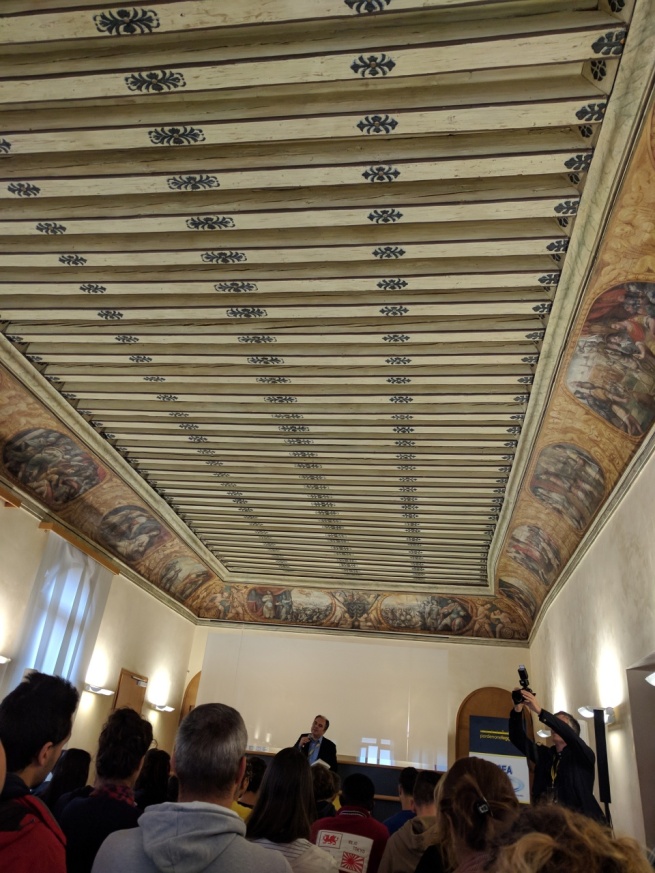 I really enjoy attending Pordenonelegge and it has become a standing appointment in my agenda. Once a year, I need it to refresh and recharge my mental batteries, feeding them with new ideas and questions that I’ll think about for the entire year. Often they also turn into cues for this blog.

Hopefully, Pordenonelegge and other similar events that occur in Northeast Italy will trigger a process that will end up establishing a new equilibrium for this part of my country.

Update: After the publication, I found this interesting article: Italy’s Northern Powerhouse.

[1]
Vitaliano Trevisan is one of them.

3 thoughts on “Northeast Italy Looking for a New Societal Balance”