A leader is the one who is able to create a world to which people want to belong. –Robert B. Dilts

Frequently, I hear about people of my generation, Generation X, and baby boomers complaining about the fact that they struggle to communicate with millennials. I also have experienced this difficulty so I decided to attend without hesitation a public meeting on this issue.

As a matter of fact, the presentation was split into two parts and two mental coaches talked. The first one explained how millennials (aka Generation Y) and the following generations differ from the previous ones. The second described briefly a leadership model, called liquid, that he claimed to be the most effective approach to interact with people in the workplace.

With regard to the first part of the talk, an overview of the following generations was provided:

Not surprisingly, these definitions are produced by marketing analyses. Their goal is to find common characteristics across the population in order to determine the most effective communication model to sell products and services to the targeted generations. From a marketing perspective, baby boomers and Generation X’ers are not that different. Instead, there is a deep fracture between Generations X and Y. The first host stated that it was even proven scientifically that this is due to a difference in brain functions.[1] This statement impressed me because I felt at that very moment that I had to learn how to relate to a new humanity, such is the deep difference between these two generations.

In the second part of the meeting, these issues were discussed from the perspective of leadership in business environments. Several examples were provided to show how the traditional approaches just don’t work with millennials. For instance, they don’t appreciate particularly receiving more money as a reward for a brilliant job. Instead, they prefer to have extra days off because they give a different value to money and private life than previous generations. The proposed approach, called liquid leadership, incorporates some of the concepts of the liquid society described by Zygmunt Bauman. If I understood correctly, the crucial ingredients are the use of empathy—which a leader is supposed to develop with specific techniques and exercises—and different communication styles to relate to people of different generations belonging to the same workgroup. Even the definition and the role of the leader has changed accordingly. As shown in the quotation I wrote at the beginning of this post, the capability to lead other people is not considered the main characteristic anymore. Rather, the emphasis is on the ability to work for the other people, in the sense of creating an attractive environment in which we’d love to spend our time (no matter if it is a company, a sports team, a family or whatever).

Many people of my generation firmly think that millennials are generally slackers and they should stop complaining and work harder. I agree that they are very different and that we often find their choices and their behaviors perplexing. But I don’t think forcing them to behave like we do is the right solution. They do see the world in a significantly different way because they grew up in a different society. And things will be even more complicated in the future. Some weeks ago, for example, I read an article in a local newspaper saying that some kids attending a kindergarten were scared of the freshly fallen snow in the garden in which they were playing. They started to cry and teachers had to accompany them inside to calm them down. 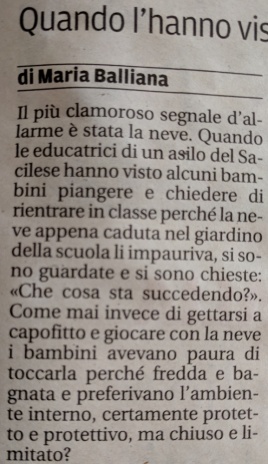 Another famous example depicting how the mindset has changed deeply is the following viral clip, in which a little girl tries to interact with a paper magazine like she is used to doing with a tablet.

Even though I understand why people my own age criticize young people, we should be aware that we have to deal with millennials and the following generations for the rest of our lives. And we just can’t change them. I’m not saying that we shouldn’t point out their errors or to pretend that we do not see them. This is especially the case if we are in charge of a workgroup. However, we should use new ways to relate to them in order to get the best out of them. This is another tough challenge for living in a world of ever-increasing complexity.

[1]
For example, American sociologist Daniel Bell stated that modern machines like computers change our brains and, consequently, affect the way we interact with the other people.

4 thoughts on “Millennials and Liquid Leadership”