There is no doubt about the fact that Venice is one of the most famous cities in the world. It is known for its peculiar structure, the absence of regular streets replaced by water canals, the magnificence of its historical buildings, etc. However, it should be known for its outstanding republican history as well. The Republic of Venice is, in fact, the longest-lasting republic in the history of mankind, as it lasted for about 1000 years.

I currently live about 80km away from Venice in an area that was part of the territory of the Republic. Even though it ended in 1797 at the hands of Napoleon, there is still a huge number of signs—not only in the physical world—which are constantly around us, reminding us of its glorious history.

The Venetian villas are one of the most flamboyant pieces of evidence of the magnificence of the Republic of Venice. Several of them are used to host museums, art exhibitions, and cultural events in general. For example, last summer I attended a concert at Villa Emo which is situated in the province of Treviso.

In July, I also attended a monologue about the history of Venice by Marco Paolini, a famous theater actor. This show is called Il Milione to tribute the very famous book which describes the travels of Marco Polo. This event took place at Villa Pisani.

Another physical legacy of the Republic of Venice is the presence of many representations of its well-known symbol, the Lion. These representations can be seen in many cities and towns of the Northeast Italy, for instance on the facades of the palaces and on top of the monuments. The following images show some examples.

In general, two kinds of representations exist. In the first one, the lion holds an open gospel. This means that the city fell under the control of Venice because of a diplomatic agreement. However, if the lion grabs a sword, the city was conquered with the war.

The Venetian style is recognizable inside many historic buildings as well. The following images show some examples in the county town of my province, Pordenone.

The following are some photographs I took in Sacile, a town I already mentioned in a previous post and which is known as the “Garden of the Serenissima” because “the many palaces that were constructed along the river Livenza for the nobility of the Most Serene Republic of Venice” (source: Wikipedia). 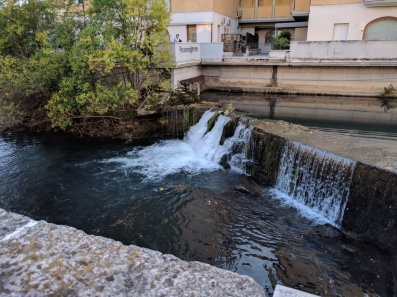 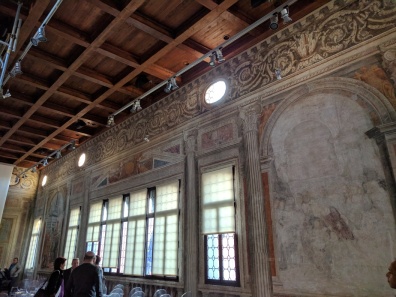 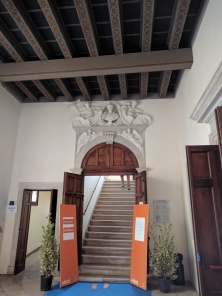 Apart from the visible signs of the republic, there are immaterial legacies in the culture of the people living in the Northeast Italy too. Of course, the flavors of the Venetian dialect, which are still widely spoken nowadays, are the most evident. But there are other less obvious aspects. In my opinion, there are two common characteristics of the inhabitants of Veneto which are good examples: the “natural” ability in the commerce-related jobs and their relationship with the money.

I think that both are a sort of legacy of the ancient Venetian merchants who were the economic expression of a future-oriented highly dynamic society. The Venetian social fabric, in fact, was open to get in touch with different cultures and to trade with different peoples. Ancient Venetians were thirsty to learn new things from the cultures they made contact with. Innovative ideas, technical expertise—what we currently call know-how—, and people flow to Venice from all the Mediterranean basin. This continuous cross-intersection of thoughts and ideas is one of the factors at the basis of the lasting prosperity of the Republic of Venice.

The openness and the dynamicity of the ancient Venetian society remind me of today’s New York City, where this flow of ideas and people takes place on a world scale. Nowadays, N.Y. is commonly considered the capital of the world, the place where all the relevant things are born before spreading all over the world. This role was played by Venice during the centuries in which it achieved its maximum splendor. That’s why I like to think about it as the New York of the Middle Ages and the Renaissance.

The centrality of the ancient Venice is wonderfully represented in several books written by Alessandro Marzo Magno, a Venetian journalist and writer. Thanks to numerous curious anecdotes, his books can be read as novels, even though they are actually historical books. My favorites are “L’invenzione dei soldi. Quando la finanza parlava italiano“, “La carrozza di Venezia. Storia della gondola“, and “Bound in Venice. The Seren Republic and the Dawn of the Book” which I found out to be available in English during the writing of this post.

From the political point of view, Venice was an outstanding example of the administration of the public affairs as well. The government of the republic was run by the Doge who was elected with a complicated mechanism by the aristocracy of the city. Although this was not a fully democratic process, it is remarkable that the head of the Republic was an elected office since the beginning, that is the year 726!

In general, the Republic was an example of good governance and vision. An excellent example is the management of one of the most precious resources the city had to rely on: the wood. Venice was literally built on top of a floor of poles which are lodged on the surface of the lagoon. Thanks to the absence of oxygen, they are not attacked by the fungi. The timber was also used to build the naval fleet which was the heart of the military power of the republic. The ships were built in the Arsenal, an immense shipyard where thousands of people worked. The majority of the trees came from Cansiglio, an area which is pretty close to my home and where I am used to hiking in the winter.

Ancient Venetians made an ingenious use of the rivers and the watercourses to bring the logs to the city. What I find more interesting, however, is the fact that they were able to plan the replacement of the cut trees, in order to avoid the total destruction of this resource which was vital for the survival of the city of Venice. Practically speaking, they created a sustainable economy, centuries before we coined the word ecology.

I think that, apart from the enormous material heritage we received from the ancient Venice, this immaterial legacy is the most important lesson we should learn from the thousand-year-old history of the Republic. Unfortunately, it seems we have not been clever pupils so far.