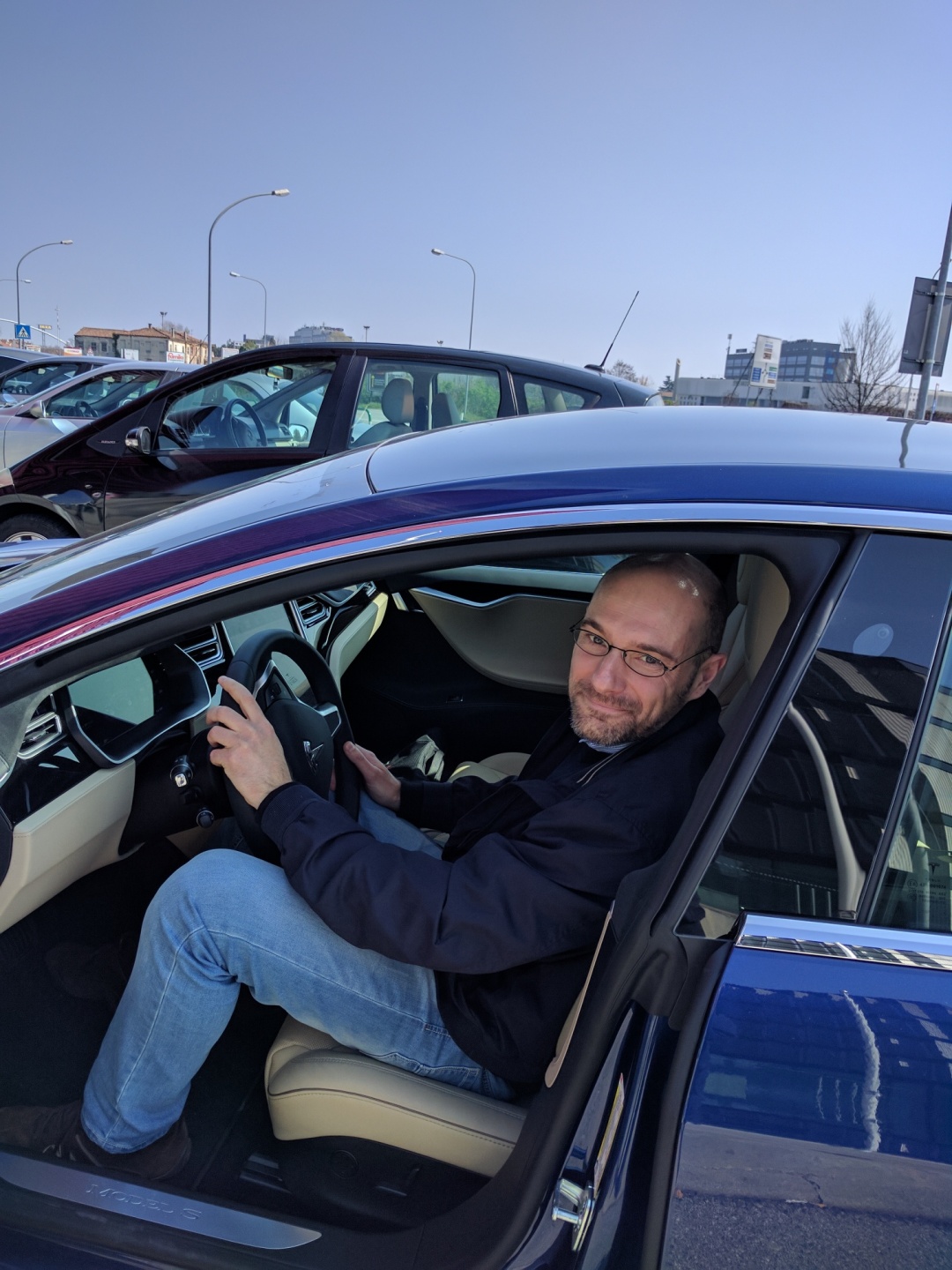 A couple of weeks ago, I had the chance to do a Tesla test drive in Padova. [1] The car I drove was a brand new Model S 90D, priced at € 125,000. I will not bore you with the list of the technical specifications of this car, as you can easily find hundreds of websites that provide them. Rather, I will describe my impressions and my feelings. Firstly, I have to preface this blog post by noting a couple of things which are important to contextualize what you will read afterward.

[1] By the end of the year, Tesla will open a service center and a store in Padova.

The overall impression I got is the sharpness of the design which is clean and minimal. The is in part due to the underlying technology which is much more simple than the one used to build combustion engine cars. 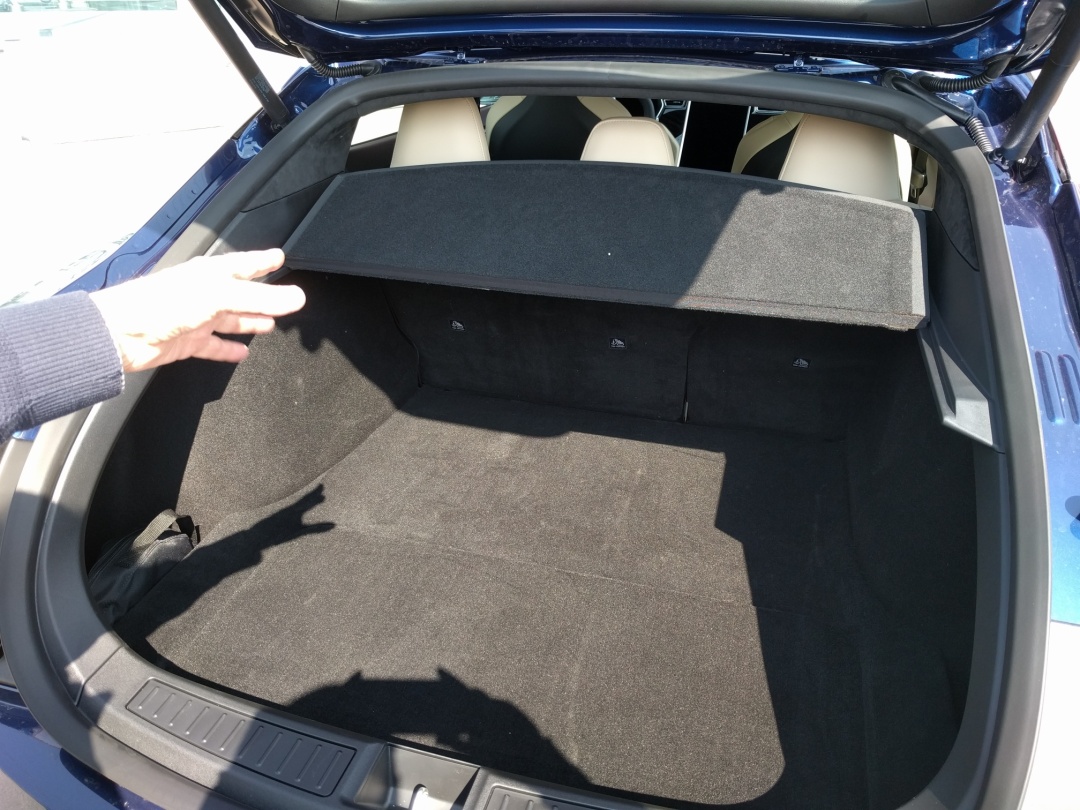 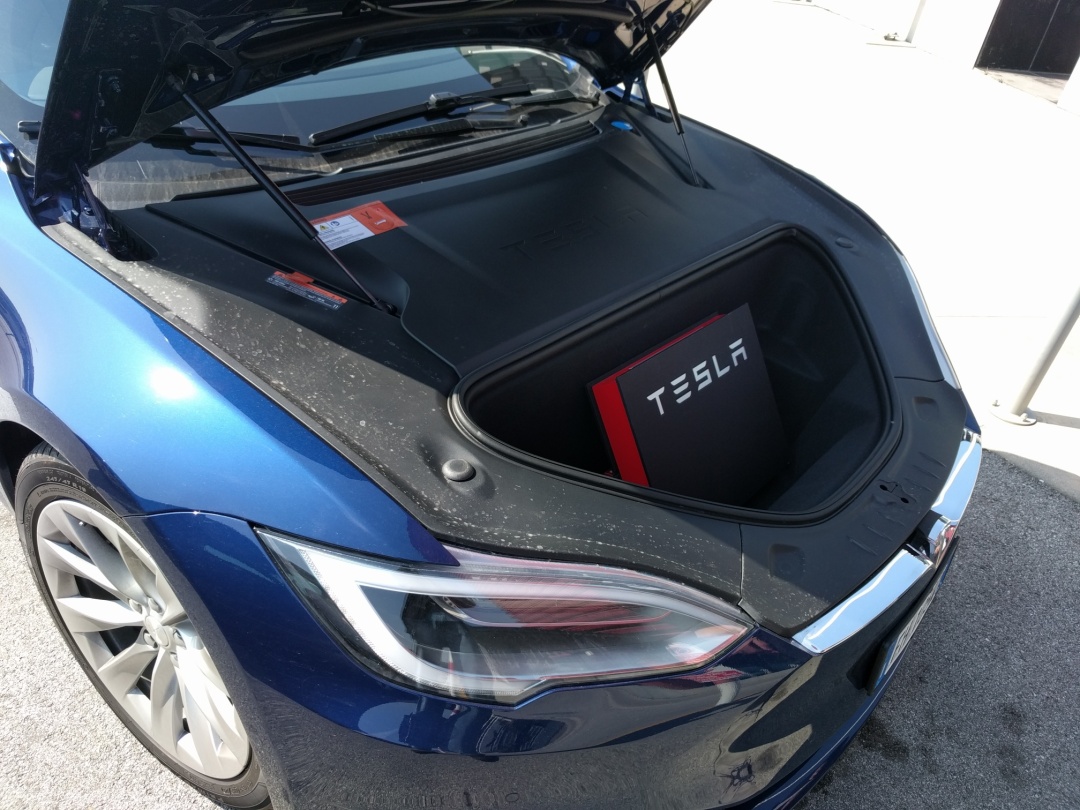 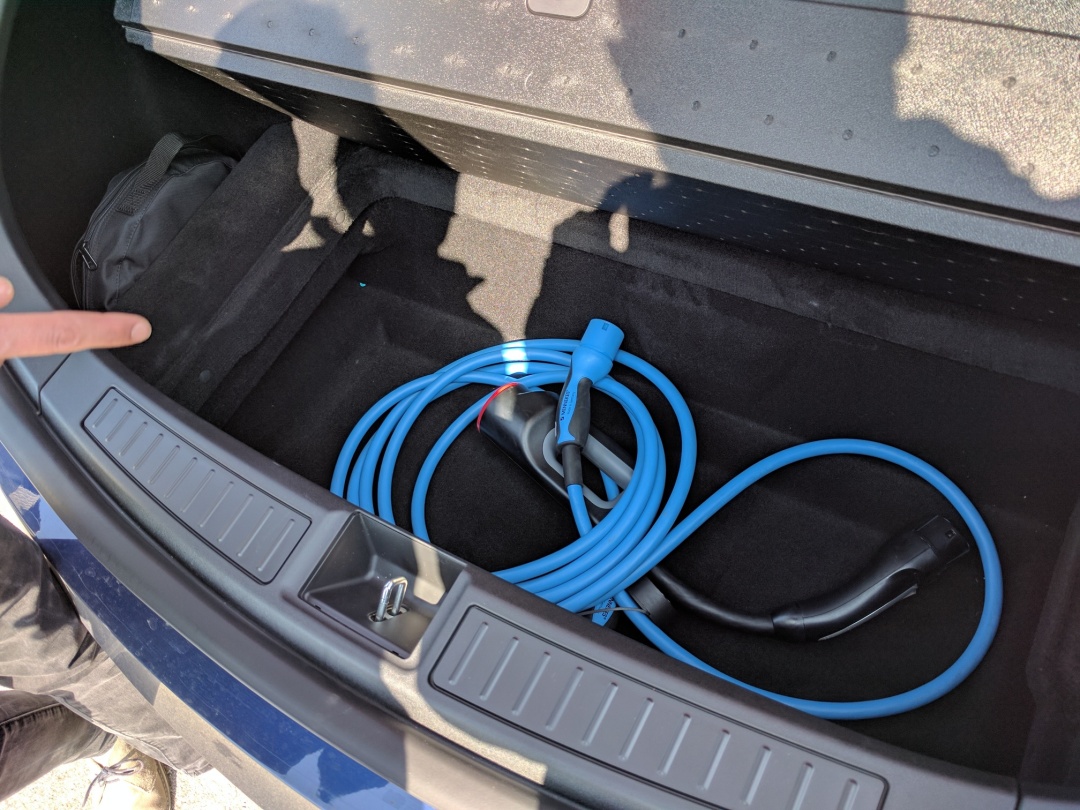 … and at the bottom of the car: 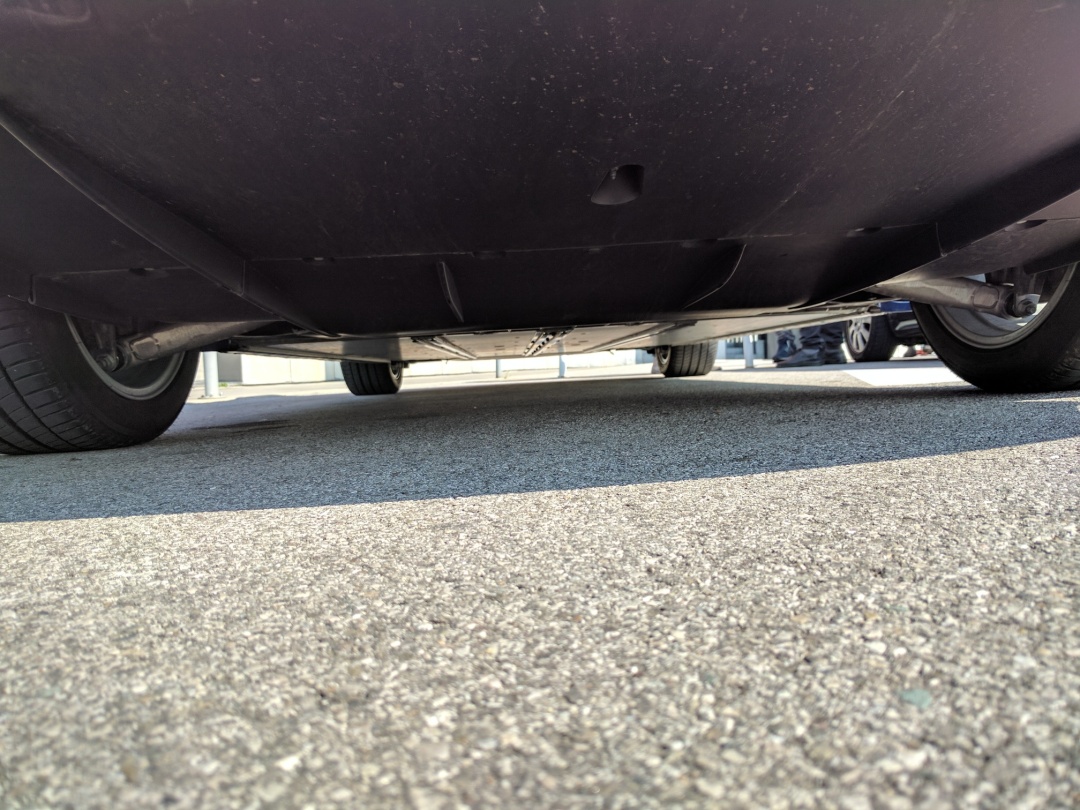 Nothing makes you think about dirty, dusty, greasy mechanical parts that can break at any minute. I’m not saying these machines are indestructible but the complexity has moved from the mechanical realm to the world of electronics and computer science. As such, I expect that the majority of the weaknesses will be related to the circuits and the lines of code which make up the soul of these machines.

Aesthetically, I find the Tesla Model S pleasing. It is soberly modern, in the sense that it is cutting edge, but it is neither excessive nor vulgar. 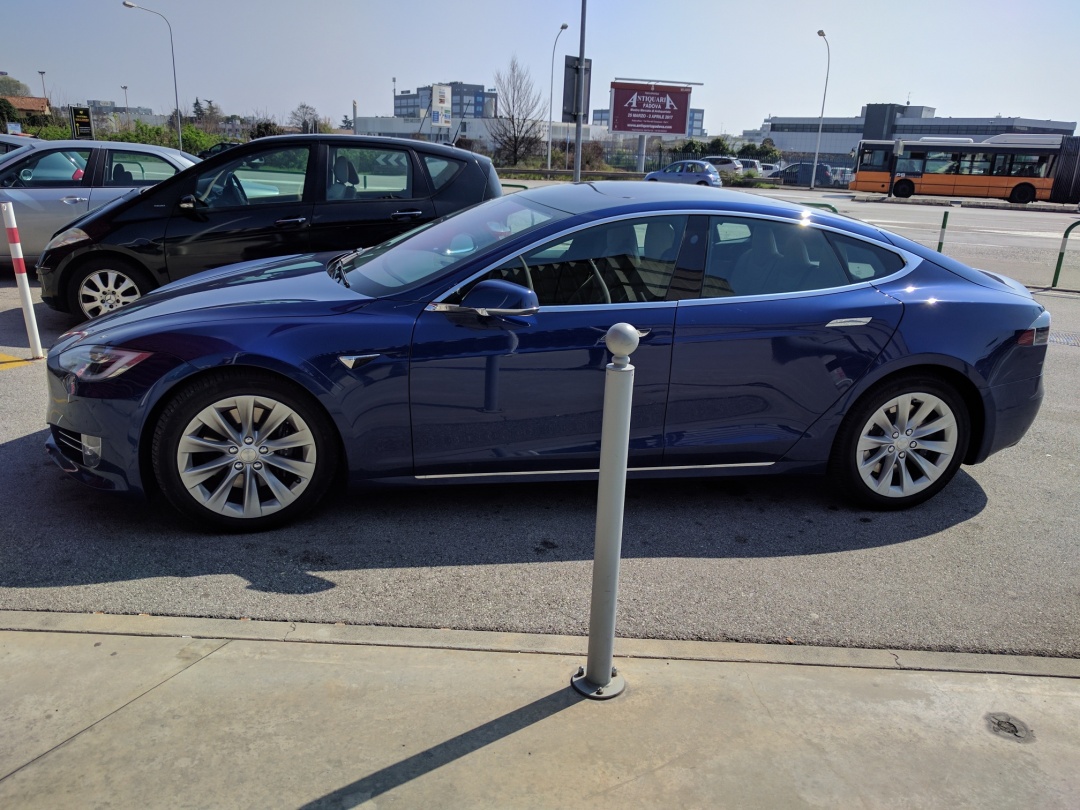 There are also several other details that were well hidden, such as the eight cameras which are used by the Advanced Driver Assistance Systems (ADAS) now, and will be used by the Autonomous Driving in the future. Three of them are placed close to the rear-view mirror: 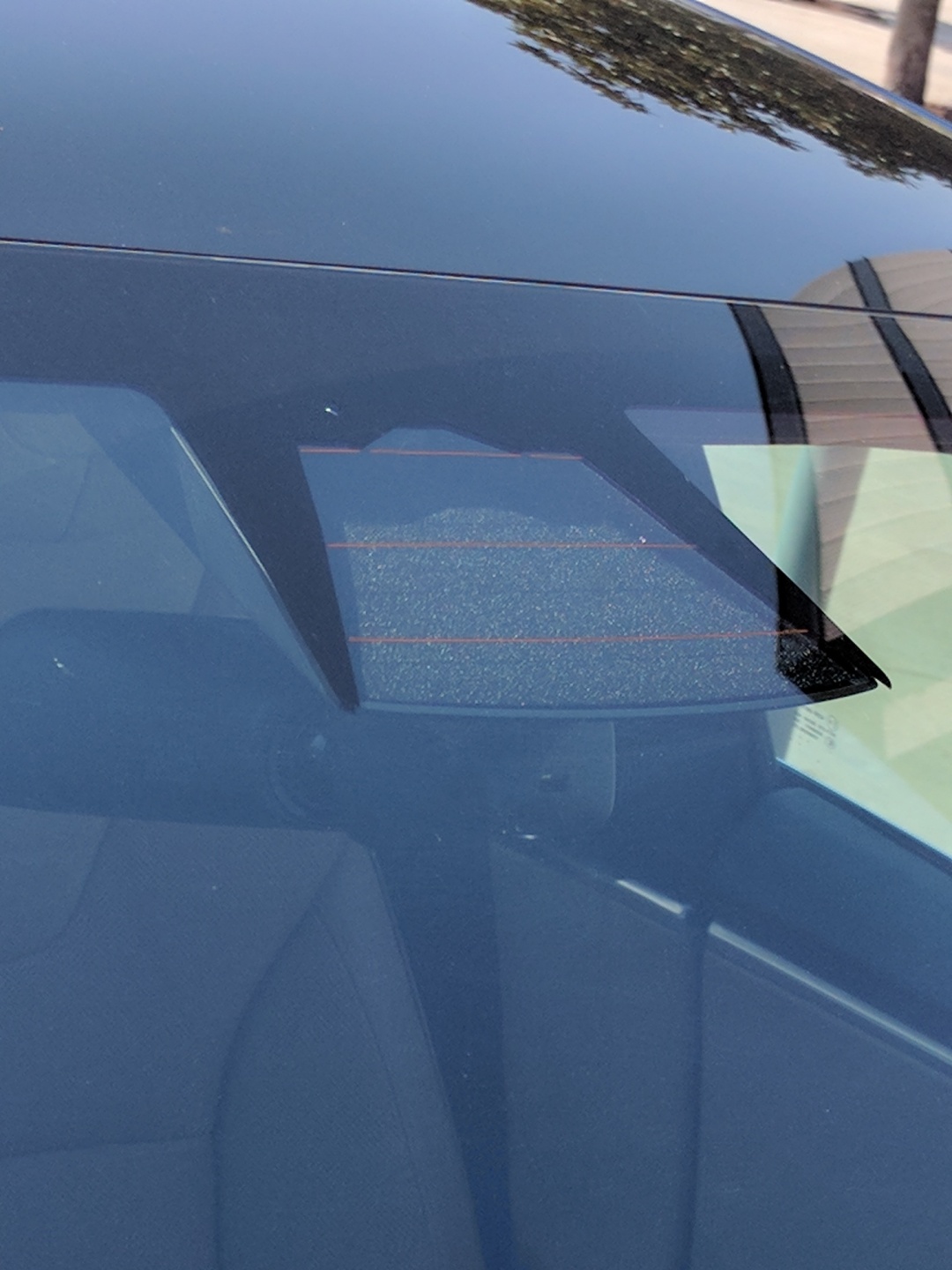 Two of them are embedded in the struts: 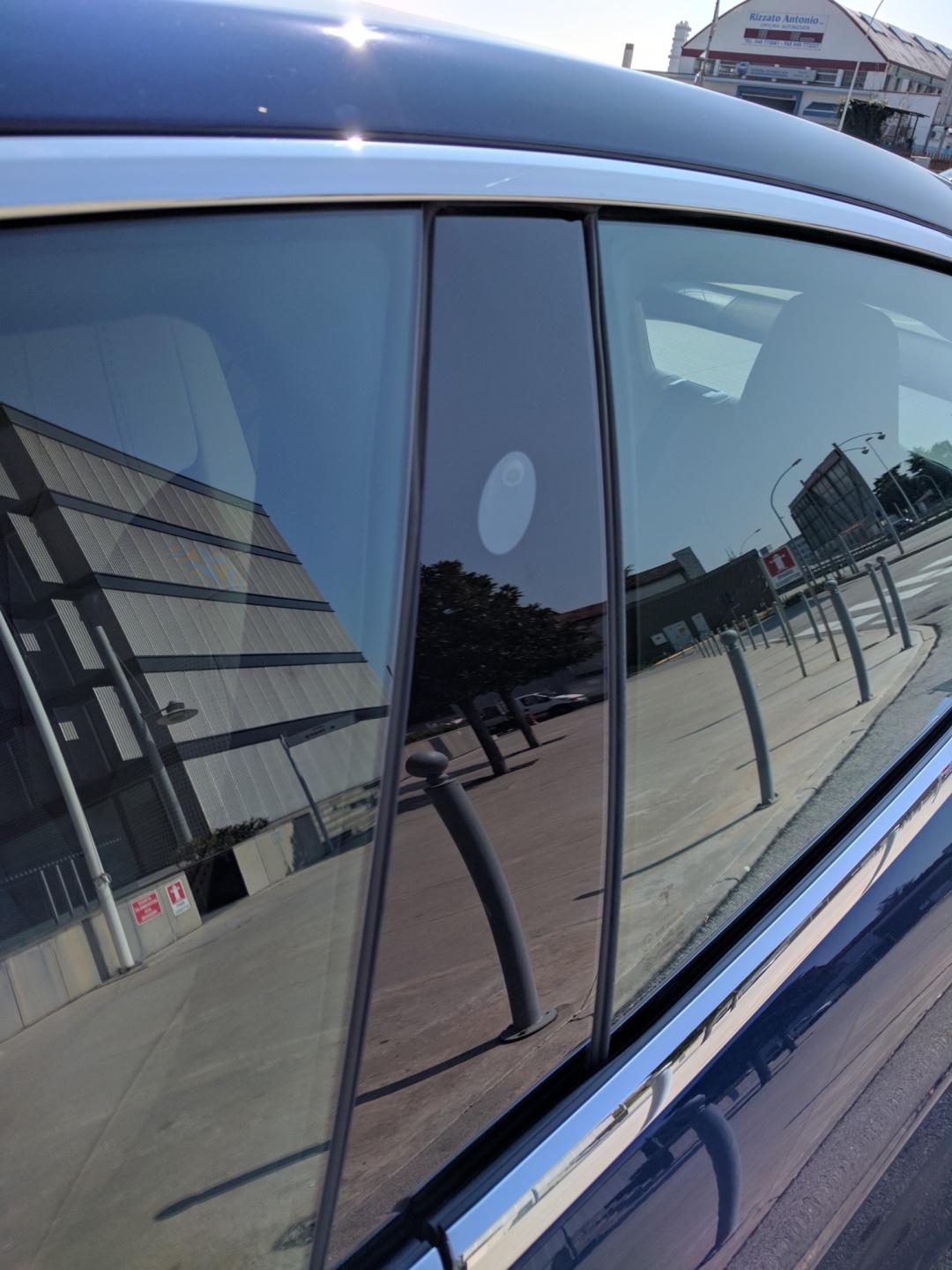 Two of them are embedded in the side direction lights: 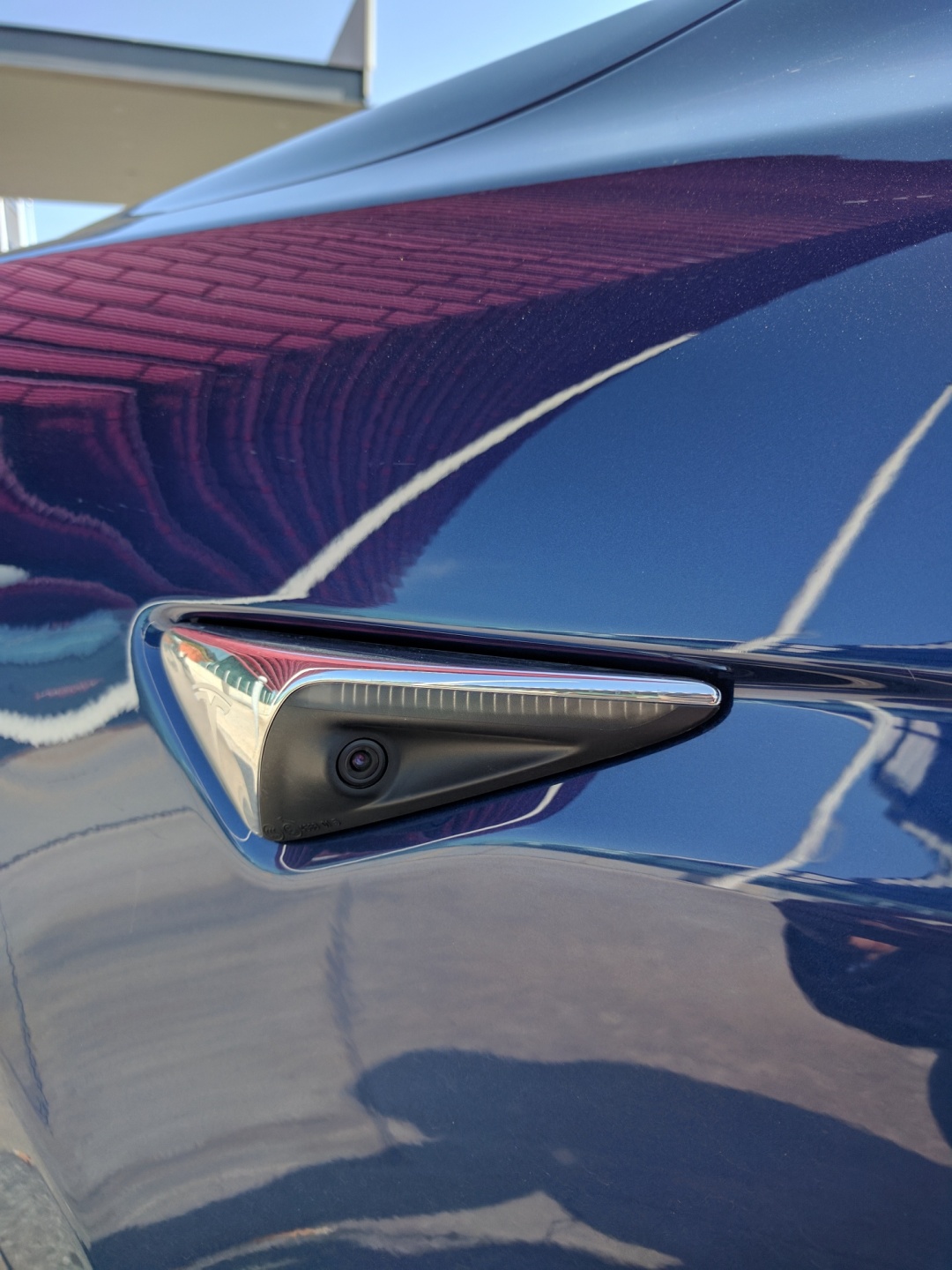 The last one is close to the rear plate: 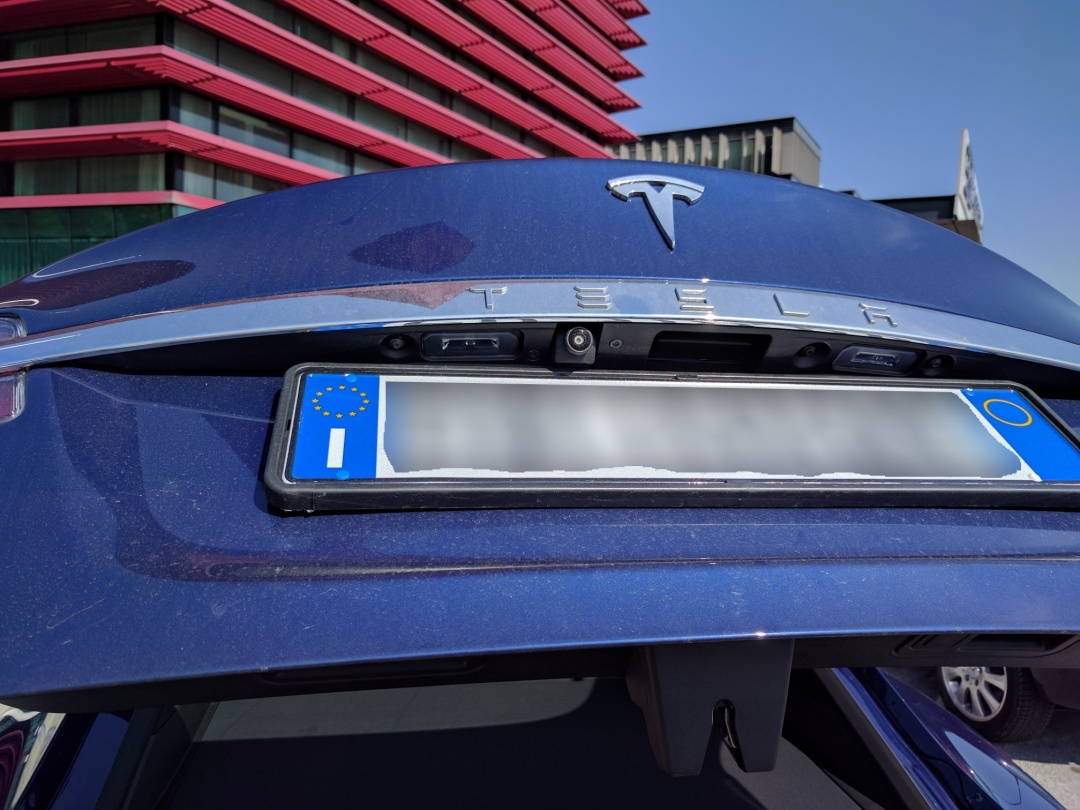 The interior is sober and clean as well: 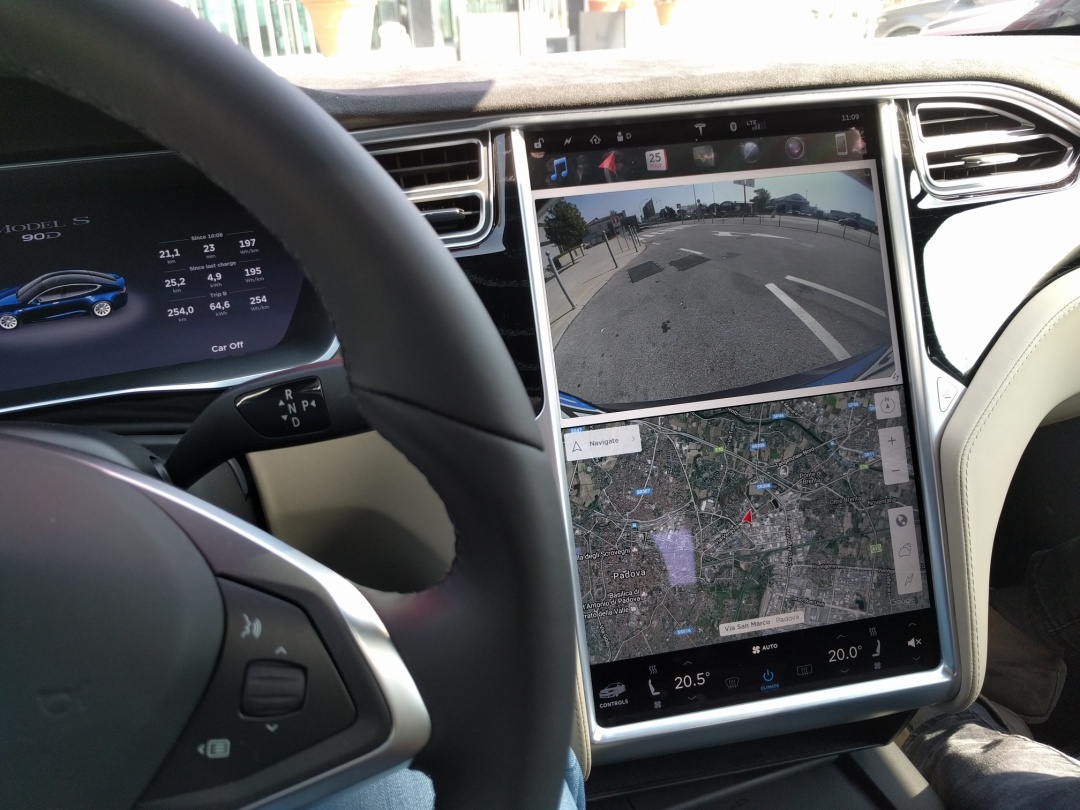 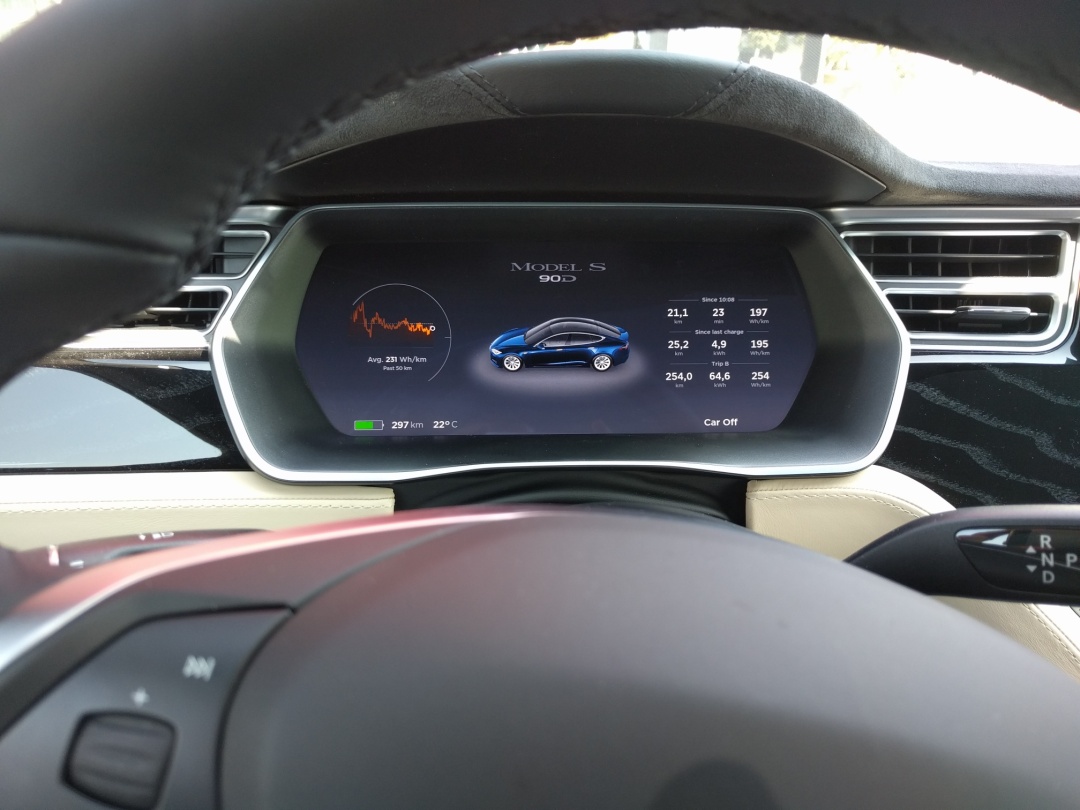 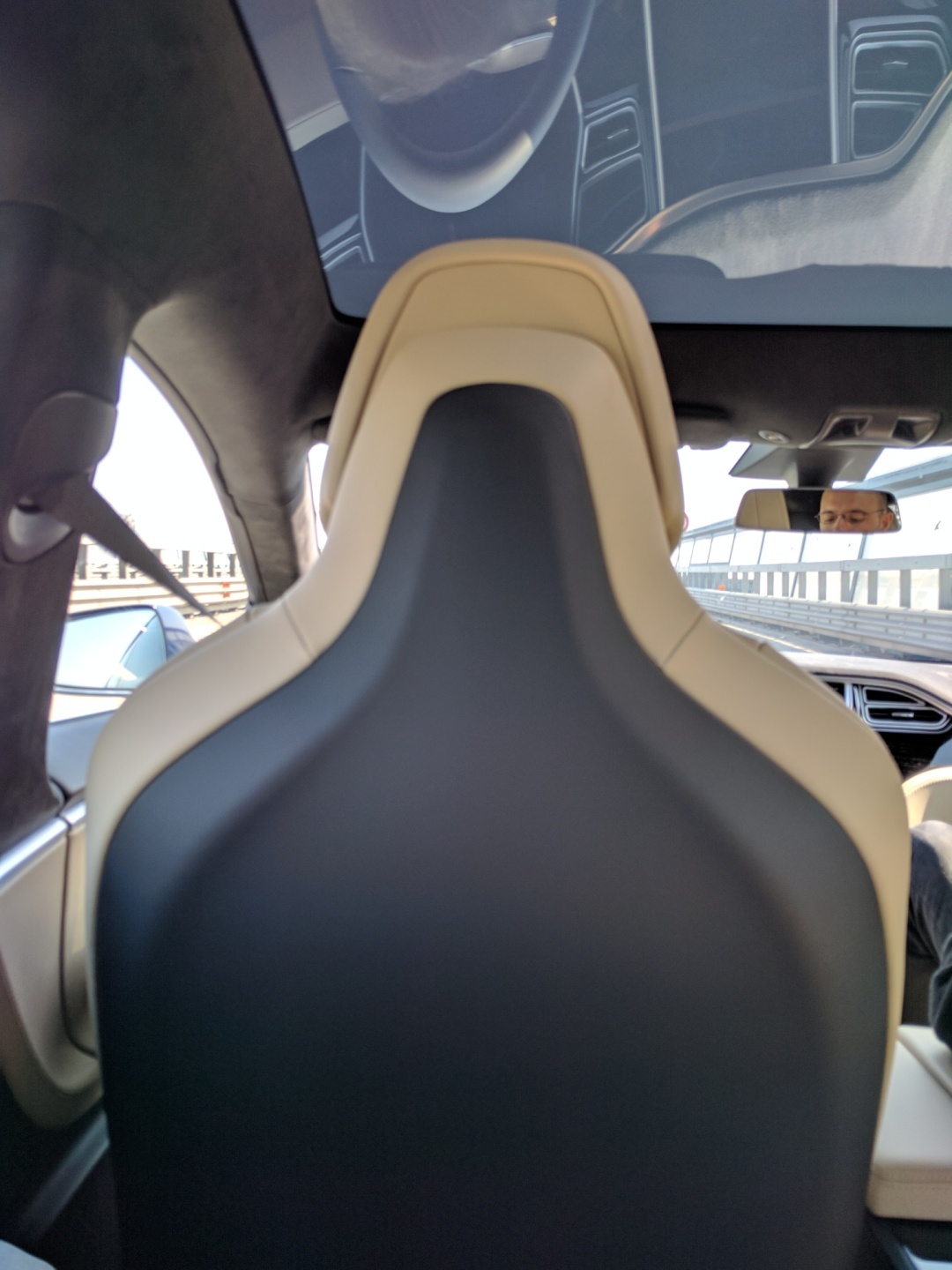 The ease of driving is fantastic. This is exactly how  I think cars should be driven (until autonomous cars are  available). No more clutch to press and release, no more shift to handle. Basically, the car is driven using the accelerator only, similarly to a golf cart. Unless you have to stop the car within a short distance, to decelerate you have just to release the accelerator pedal. Even if you don’t press the brake, the car actually brakes anyway and the brake lights turn on because of the regenerative braking mechanism. This is the most efficient way to use the energy stored in the batteries, as you don’t dissipate energy to slow the car down. On the contrary, you exploit its kinetic energy to recharge the batteries.

To select the mode (Park, Reverse, Neutral, and Drive), you have to use the leverage on the right of the steering column. The majority of the other controls (navigation system, air conditioning, etc.) are accessed by the large touch screen. Besides the traditional full-screen mode, it also provides a helpful split mode view: 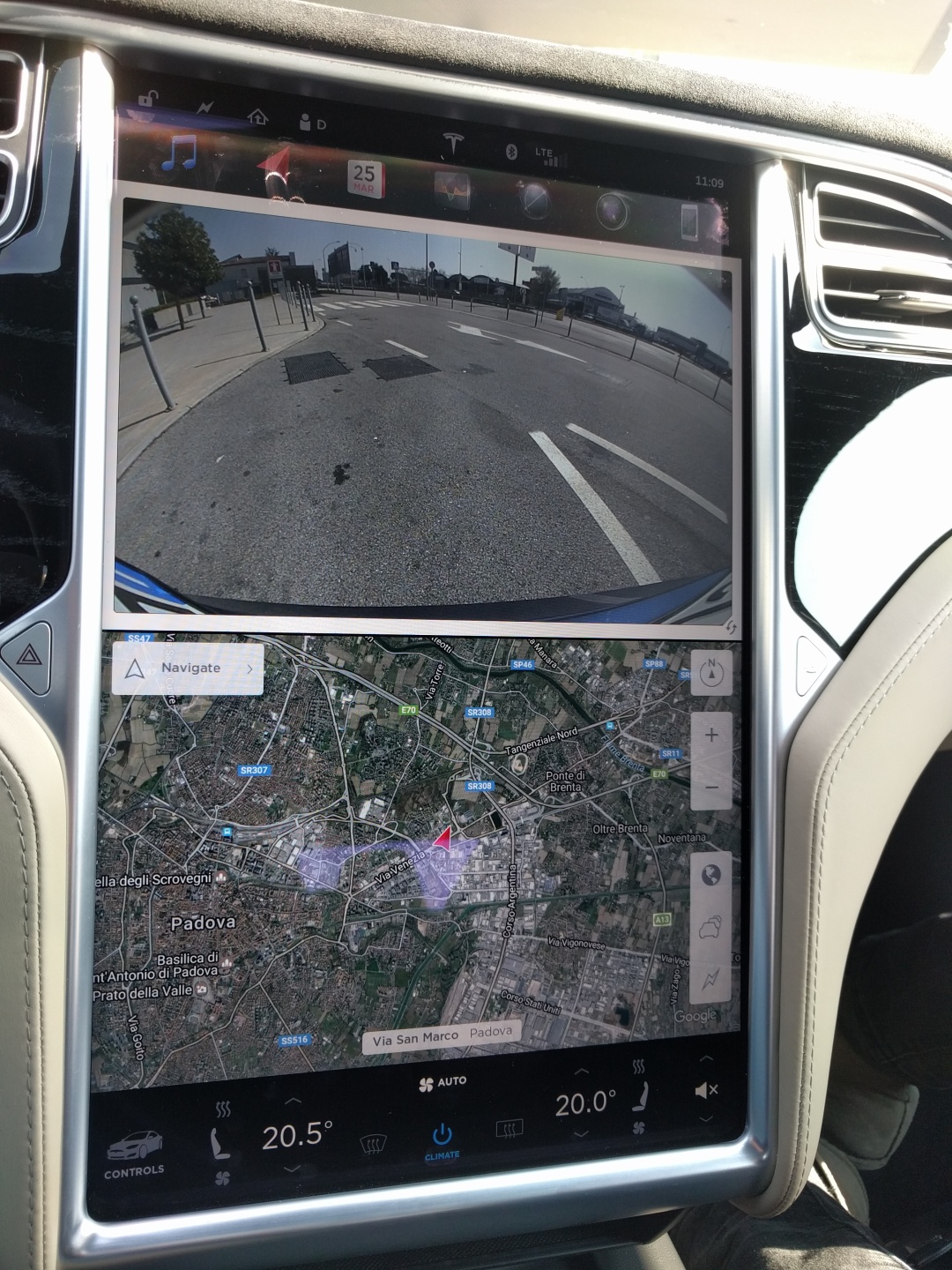 So, what about the pure performance? As I drove on regular streets, I could not test the top speed that is software-limited to 250 km/h (frankly speaking, I would not have the guts to do that in any case …). However, I had the chance to test the famous acceleration of the Model S. The feeling you get when you press the pedal decisively is just amazing. Even if you are traveling at a relatively high speed—say 80 km/h—when you press it, the car is able to react impressively, and it makes the other vehicles that you easily overtake seem like bicycles. The off-the-line acceleration is even more terrific. The manufacturer claims it takes 4.4 seconds to go from 0 to 100 km/h. Believe me, this figure is not overstated. When I did this test, I immediately thought about Tesla owners saying that it has an unbelievable motorcycle-like acceleration, even though it is a 2.1 ton beast. The car forcefully—but silently—pushed my chest against the seat and literally took my breath away. My heart suddenly started to beat like a drum. I clearly felt it pulsing furiously in my throat. In those few seconds, I was deeply scared. I was afraid I would lose control of the car at any second. However, I felt an astonishing sense of power at the same time. For seconds, I truly believed I could rule the road. Priceless. [2]

Another feature that Tesla cars are famous for is the Advanced Driver Assistance System (ADAS). Due to the limited duration of the test drive, I was not able to exercise it extensively. For instance, I never took my hands off the steering wheel. However, I always felt assisted by the electronics. If you look at the dashboard, you see several graphical objects surrounding the image of the car, which are constantly updated by the ADAS. Examples are the lines delineating the road’s layout, and the cones associated to the cameras used to indicate the presence of nearby objects.

[2] The top performance configuration of Model S has a 0-100 km/h acceleration of 2.5 seconds. I hardly can imagine how terrific it must be!